It started on Friday when we were able to dress up at work and had a lovely little potluck. I knew I wanted to go literary this year, but there was so much to choose from. I went with an old favorite who is widely recognizable, Pippi Longstocking.

Being super introverted I already teeter a line of being comfortable in costume, but I find that if I don’t have to explain a not so popular fandom it feels good to dress up. 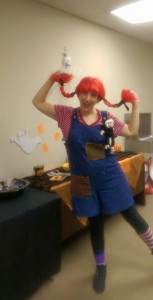 In September I decided that I was going to give out books on Halloween in addition to candy. (I would NEVER cheat the trick or treaters out of their candy!) Usually I drag a table to the end of my driveway to pass out candy because my yard isn’t well-lit and I don’t need kids who already can’t see through their masks tripping over a pine cone. But this year, my neighborhood decided to do a “trunk-or-treat” in the parking lot of our pool. So, I spent some time thrifting and yard sailing for used kids books. My cousin was also extremely helpful in mailing me a stack of books her daughter had outgrown. I tried to get a pretty good mix for all age groups, being that trick-or-treating is for the tiny toddler up to teenager.

I drove across to the pool to get all set up for our 6 PM start time.  After tangling myself in spider webs and trying to figure out how to keep a string of Halloween garland from falling from atop the car I had what I thought was a pretty good setup that I dubbed “The LiBOOrary.”

Kids began to stop by the festivities and I watched as their faces lit up when I tossed some candy into their bags and said, “You can also pick a book.”  Much of the response was, “Any book I want!?!?!?” I was so happy to see the positive reaction. Even better, so many parents really liked the idea. I didn’t see any of them hovering or try to influence the child’s pick. I am kicking myself for not counting how many books I started with, but by 7:40 I was out. (Still plenty of candy though.)

As long as I can afford it, this will become my new Halloween tradition, and I invite anyone else who wants to snag the idea to do so. Of course, let me know if you do next year so we can compare notes. Upon observation I need to plan for more middle grade and YA books next time and probably need to start collecting in August at the latest. Hopefully I can get more donations and not have to spend quite as much cash. Happy BOOkish Halloween!