I have an upside down shaped hole in my heart now that I have binge watched the eight episodes of the new Netflix throwback Sci-Fi/Horror series, Stranger Things.  If you are already missing Eleven and the world of Hawkins, Indiana maybe some of the following books will help feed your brain along with your Eggo addiction. 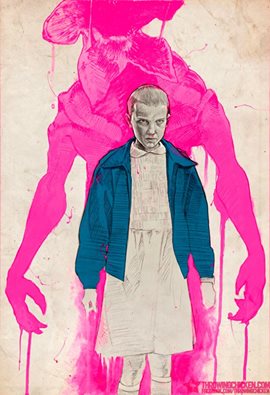 The Girl With all the Gifts by M.R. Carey – A young girl who is held at gun point and strapped to a chair in order go go about her daily business which is just to go to class. Perhaps a kindred spirit of Eleven?

The Southern Reach Trilogy by Jeff Vandermeer – A mysterious plot of land only known as Area X is explored time and again by scientific expeditions, only to have the members never return or return with severe mental health issues. Now in its 12th expedition, The Biologist (as she is only known) details her experience in collecting specimen and mapping this very strange region. Annihilation is the first in the trilogy.

The Beautiful Bureaucrat by Helen Phillips – Josephine goes into work every day, entering an endless string of numbers into a database (or The Database). She does not question this task as the money is very good. However, the office walls seem to come alive, her husband mysteriously disappears and she keeps having very odd encounters with a co-worker called Trishiffany. What is this business anyway?

Wytches, Vol. 1 by Scott Snyder  – This trade collects the first six books of the Wytches comic. A chilling story about a family who moves to a new town for a do-over, only to find their past haunting them. Creepy trees? Check!

Shadowshaper by Daniel Jose Older –  Maybe you would like a touch of NYC with your paranormal? Brooklyn is being overtaken by the evil-doings of a bad anthropologist. High school student Sierra Santiago must quickly learn about the magic of her Puerto Rican heritage in order to save her neighborhood and possibly the rest of the world. She’s a Shadowshaper who can contact the spirit world through art.

Honorable Mentions: Go read all of the early 90s Christopher Pike books and R.L. Stine’s Fear Street series. Also, check out Neil Gaiman’s The Ocean at the End of the Lane as I have a feeling Lettie Hempstock and Eleven would be BFFs for sure. I think it goes without saying Stephen King’s The Body, Firestarter and Carrie also embody the feeling of Stranger Things.

If you would like a print of this amazing illustration of Eleven please visit Throwing Chicken on Etsy. While you are at it, give them a like on Facebook as well!