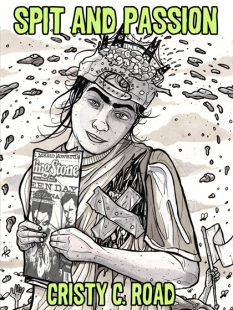 In celebration of LGBTQ+ pride month, I would like to present to you for this Tunesday in June, Spit and Passion by Cristy C. Road. I met Cristy in the late 90s when we were both awkward teens trying to figure our shit out on America Online in the depths of Punk and Green Day chatrooms. After years of publishing zines, Cristy put out this amazing graphic memoir examining her identity as a queer pre-teen in a Cuban household in Miami. Like myself, Cristy clung to Green Day as a life preserver in deep seas of identity confusion. Spit and Passion explores being queer and closeted while reaching out to grasp art and music that keeps one afloat when feeling alone.

You may recognize Cristy’s subversive artwork that has appeared all over progressive politics and punk rock showing us a beautiful world of queer people of color. In this pairing, I present the song that closed out Green Day’s MTV live show, Jaded in Chicago, She. I wore out my VHS playing this over and again, sobbing and singing. This song was a big part of staying alive through the 90s for me, and it is the perfect soundtrack for Spit and Passion.